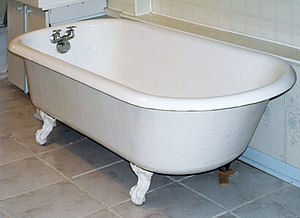 A bathtub, bath, or tub (informal) is a large or small container for holding water in which a person or animal may bathe. Most modern bathtubs are made of thermoformed acrylic, porcelain enameled steel, fiberglass-reinforced polyester, or porcelain enameled cast iron. A bathtub is usually placed in a bathroom either as a stand-alone fixture or in conjunction with a shower.

Modern bathtubs have overflow and waste drains and may have taps mounted on them. They are usually built-in, but may be free-standing or sometimes sunken. Until recently, most bathtubs were roughly rectangular in shape, but with the advent of acrylic thermoformed baths, more shapes are becoming available. Bathtubs are commonly white in colour, although many other colours can be found. The process for enamelling cast iron bathtubs was invented by the Scottish-born American David Dunbar Buick.

History of bathtubs and bathing[edit]

Main articles: Bathing and History of water supply and sanitation

Documented early plumbing systems for bathing go back as far as around 3300 BC with the discovery of copper water pipes beneath a palace in the Indus Valley Civilization of ancient India; see sanitation of the Indus Valley Civilization.[citation needed] Evidence of the earliest surviving personal sized bath tub was found on the Isle of Crete where a 1.5-metre (5 ft) long pedestal tub was found built from hardened pottery.[1]

The clawfoot tub, which reached the apex of its popularity in the late 19th century; had its origins in the mid 18th century, where the ball and claw design originated in Holland, possibly artistically inspired by the Chinese motif of a dragon holding a precious stone. The design spread to England where it found much popularity among the aristocracy, just as bathing was becoming increasingly fashionable. Early bathtubs in England tended to be made of cast iron, or even tin and copper with a face of paint applied that tended to peel with time.

The Scottish-born inventor David Buick invented a process for bonding porcelain enamel to cast iron in the 1880s while working for the Alexander Manufacturing Company in Detroit. The company, as well as others including Kohler Company and J. L. Mott Iron Works, began successfully marketing porcelain enameled cast-iron bathtubs, a process that remains broadly the same to this day. Far from the ornate feet and luxury most associated with clawfoot tubs, an early Kohler example was advertised as a “horse trough/hog scalder, when furnished with four legs will serve as a bathtub.” The item’s use as hog scalder was considered a more important marketing point than its ability to function as a bathtub.

In the latter half of the 20th century, the once popular clawfoot tub morphed into a built-in tub with a small apron front. This enclosed style afforded easier maintenance and, with the emergence of colored sanitary ware, more design options for the homeowner. The Crane Company introduced colored bathroom fixtures to the US market in 1928, and slowly this influx of design options and easier cleaning and care led to the near demise of clawfoot-style tubs.

Freestanding tubs have become popular in recent years as a result of larger bathrooms being constructed. Freestanding bathtubs are made from a variety of [3]materials including stone resin, cast stone, acrylic, cast iron, fiberglass, and porcelain.